Gone to the Dogs

My raspberries have gone to the dogs. Literally. 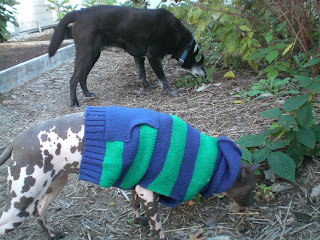 I was walking past my potted citrus trees, not really giving them more than a casual glance, when something unusual caught my eye. It was a big nasty brown area on a large but immature lemon.

I picked it off the tree and gave it a closer look. It actually had the appearance of a bulls-eye; brown concentric rings spreading from a circular center. I walked inside and fired up the Google while the bulls-eye stared back at me.

After a quick research session, I concluded that this lemon suffered (it's now deceased, I chucked it in the bin) from Citrus Brown Rot. According to the UC Pest Management Guidelines:

"Brown rot is caused by multiple species of Phytophthora when conditions are cool and wet. Brown rot develops mainly on fruit growing near the ground when Phytophthora spores from the soil are splashed onto the tree skirts during rainstorms; infections develop under continued wet conditions. Fruit in the early stage of the disease may go unnoticed at harvest and infect other fruit during storage."

Phytophthora is a tongue twister. It's also sort of like a fungi but also different. I won't get into the biological details. Not because I don't want to bore you, but because I don't understand most of it.

Guess where this lemon was growing? Yup, about four inches off the ground. We received over 10 inches of rain in the past five days and conditions have been generally wet and humid for two months. So basically perfect conditions for this stuff to thrive.

While I was fairly confident I correctly identified the ailment, I was more than disappointed that the person who named said ailment was less than creative. Citrus Brown Rot. Seriously? What about something like Brown Cyclops Syndrome or Ring of Suffering?

For the true fig lover out there, nothing is hotter than pictures of ripe figs. In full confession, I actually borrowed the expression from a member of the Figs4Fun forum. Here are a few pics of my Violette de Bordeaux and Celeste figs from my garden this morning. Keep your shirt on...

.09 Acres
I'm just an average guy in a small neighborhood in Tidewater, Virginia. Most of my neighbors have well manicured lawns. Not me. I'm attempting to turn my .09 acre yard into a suburban micro farm. Stay tuned as I wave goodbye to grass and say hello to homegrown organic vegetables, fruit, and herbs.